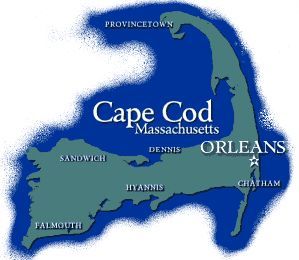 Originally known as South Parish of Eastham, which was settled in 1644, Orleans became incorporated in 1797 after seeking independence since 1717. The Nauset Tribe of the Wampanoag Nation were the indigenous people of this area. We honor our indigenous ancestors and their descendants for their wisdom, traditions, foresight, wise stewardship of these lands, and their continued guidance.

Sea Captains and ordinary seamen of Orleans manned the merchant and whaling vessels during the age of sail.The sea has influenced the economy of Orleans from the beginning to the present. Salt works were located on the bay and Town cove shores. There were many domestic needs for salt and the fishing fleet's requirements were large for fish preservation. Finally with the discovery of salt deposits in the U.S. the salt-making industry became obsolete in the 1850s.

The fishing industry has waxed and waned through the years according to the supply. Fish weirs and small boat hand lining as well as coastal whaling thrived in the early years. Today there is a large charter boat sports fishing fleet located in Rock Harbor, which has been the Orleans center of maritime commerce and history.

The members of Nauset Tribe of the Wampanoug Nation initially taught the settlers about shell fishing. It has continued to be an excellent source and generally reliable monetary factor in good and bad economic times. Now aquaculture appears to have a successful future.

Packet boats were the mode of transportation of goods and people until the arrival of the railroad in 1865, which opened up other avenues of commerce such as pants manufacturing. The railroad spawned early tourism. The many needs of the town supplied by the railroad were taken over by cars and trucks. Railroad service to the town ceased in the 1950's.

Shipwrecks were a common occurrence until the Cape Cod Canal was built. The rescue and care of survivors were part of everyday life until the Massachusetts Humane Society composed of volunteers lead to the formation of the U.S. Life Saving Service in the 1870's. The salvage of shipwrecks and their cargoes became part of the economic structure.

Orleans is no stranger to enemy attack. The war of 1812 created great hardship on the Cape as Britain controlled and blockaded the towns of Cape Cod. An attack on Rock Harbor in December 1814 by the British Marines from H.M.S. Newcastle was swiftly repelled by the local militia with one fatality to the British.

Orleans has the distinction of being the only U.S. site of attack by the Germans in WWI. A German U-boat fired upon the tug Perth Amboy and four barges in the Nauset area in July 1918.

Farming was a constant factor from the beginning of the settlement. The once heavily forested area became decimated fuel to the creation of farming and pasture needs, lumber for housing, heating needs and the ship building requirements of both the English King and the colonists. Commercial agricultural products of the 1920's and 1930's was asparagus while cranberry harvesting was prevalent from the late 1800's to the 1930's.

The formerly barren landscape is now covered with trees and vegetation and people are very supportive of land conservation. The advent of the National Seashore Park in 1962 created the complete tourist economy of today. The charm and beauty of the town has created a large retirement population with a younger service population.