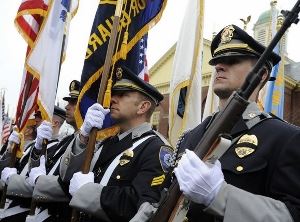 In 2004, the Orleans Police Honor Guard was formed as a 5-Officer unit, and became a representative memorial unit of the Orleans Police Department. There are currently 7 full-time members of the Police department that have committed themselves to be the support mechanism for the families of Officers who have been killed and/or injured in the line of duty.

Sadly, somewhere in the United States, a Police officer dies in the line of duty every 53 hours. Since its existence, the Honor Guard has attended funerals and memorial services throughout the Cape Cod and New England areas in support of their fallen brothers and sisters. Members of the Orleans Police Department Honor Guard will honor members of the Law Enforcement community and their families who have paid, and will continue to pay, the ultimate sacrifice.