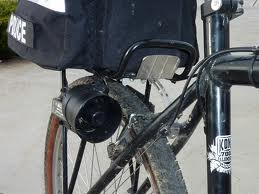 The Orleans Police Department currently has 5 mountain bikes, and 6 full-time officers and all Community Service Officers are certified for mountain bike patrol.

While riding a bike may seem simple, patrolling on a mountain bike can present some unusual and dangerous situations to the officer. To address these hazards, all bike patrol officers have completed a strenuous 3-day police mountain bike training course known as Cops On Bikes With Education for Bicyclists, or COBWEB.

Training classes included sessions in nutrition, injury prevention, avoiding a crash and riding maneuvers. In addition, officers were trained in the use of force and defensive tactics that are unique to a mountain bike officer. Lastly, completion of the program was dependent on each officer completing a demanding off-road and on-road mountain bike obstacle course.

Having a patrol vehicle nearby enables the bike officer to return to the vehicle quickly in the event the officer is needed for other duties. Overall, the bike patrols are deployed during the highest crime period as determined by statistical information compiled through our computer system. In addition, most officers are deployed in teams, although officers patrolling alone is not uncommon.